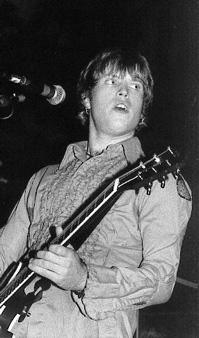 This interview was conducted in June 1997 and first appeared in the September 1997 print version of TransAction Magazine.

The Band: Background and more photos

Karena Bernard: What do you think of Mansun's insane popularity in Japan? Are you comfortable with being such a public person?

Dominic Chad: I think it was quite a laugh when we went over there-being treated like that, especially the first time we went over there. We found ourselves to be more popular over there than we were here [in the UK] at the time. But to a certain extent I think thatís the case for pretty much any British band at the minute over there. They tend to have an obsession with British bands in general.

KB: It must take some getting used to, though.

DC: Yeah, I mean we were sort of told before we went over there that that was pretty much what to expect--by people who have been over there with other British bands. There are bands, such as Blur, who are huge over there. I think Supergrass as well. They can't walk around. We were told that it's pretty crazy for British Bands at the moment, so we were prepared for it. I mean you go over there for a week and it's all good fun, then you come back to real life, working in studios and trying to make records. You get back down to earth a bit.

KB: What happened to the young woman who tried to kill herself in front of Paul? 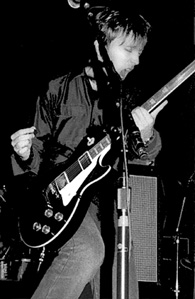 DC: Oh I think thatís a bit exaggerated . We went to this nightclub in Tokyo. Paul wasn't actually there. It was me and Andy, and a girl came up to us and just kinda drew this knife out and just started kind of drawing across her arms. Nothing very bad or anything. She just was sort of grazing herself. But not the sort of thing you'd want someone to start doing in front of you. One of our road crew was there as well, so he just grabbed the knife off of her and went out and threw it away. Then we sort of, ehm, made a sharp exit (laughs).

...this scout came up from London--he came in and asked if he could listen to us. And he went away and literally like a week later he phoned us up and said there's a publishing deal if you want it, and we said, "Oh great!" So we did it. We packed our jobs in not knowing what we were doing and set up our own record label called Sci-Fi High-Fi Records and released two singles on that.


KB: Wow, that really got exaggerated. I was told that someone went up to Paul and plunged a knife in her heart and the blood was gushing out and she almost died...(laughs)

DC: Oh no! Well we'll have to clear that one up, then. These stories sort of do get bigger, don't they?

KB: Was she put off by the band? Do you have any idea on what might have brought that on?

DC: No, because she actually turned up for the gig the next night. Another girl came up to us and said that the girl who started cutting herself said she's sorry. She wanted to apologize for freaking us out. She was only a kid, probably about 17. That was her way of getting attention. She thought that was the way to do it--to get the attention of a rock band. Unfortunately, she obviously misjudged us and the things we're were into.

KB: Maybe Marilyn Manson would have been a little more supportive of that.

KB: Glastonbury! That must have been a stunner. On stage....

KB: What did the band do? Were you all just shocked? [Mansun's set was cancelled after only one song due to technical problems caused by the flooded concert site.]

DC: We weren't shocked in as much when you turn up to a festival like that and it's basically how ever many miles from anywhere and they're trying to sort of run power out into the middle of a farm to power up a band and a huge light show, sometimes something is gonna go wrong. Plus there was two feet of mud across the whole site, and for the whole weekend people were throwing handfuls of mud at the bands on stage. Certain bands that they didn't like, particularly--and especially the ones who asked them not to throw mud on stage. 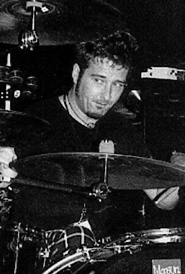 DC: Well you would, wouldn't you. So I think that by the time we got on was the generator that we were running off of was caked in dirt. Because we were the second to last band on, they didn't have time to get us off, change the generator and let us start again because we would have set the last band back how ever long. So we just had to say,"right. Let's go home." The Bluetones were on after us and everything was ok for them cause, you know, they changed the generator. 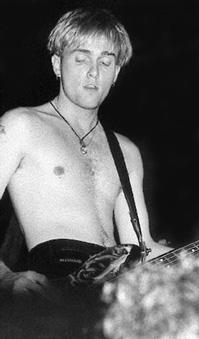 KB: It's also been said, to reinforce what you've just stated, that Mansun is a contradiction, that the minute you're labeled as something, you'll turn around and do something completely opposite, so that all the preconceptions are thrown out.

DC: Right. We'll very much go on our instincts on pretty much anything. We'll kind of get up one day and feel like doing something completely different from what we've been doing every other day, and we'll just do it. It could be something musical or it could be going out and buying a suit and wearing it, you know what I mean? And people go, "Oh you're wearing a suit! You've never worn a suit before." And it kind of confuses them. And it's the same sort of thing with the music. We don't actually set out to confuse people, but we enjoy experimenting with all sorts of things. That's something we do a lot of.

There was one particular Dr. Who shirt, which was the best one. It was a frilly shirt but it was a zip up. I've never seen a frilly shirt with a zip, I haven't been able to find one, but I really want one. See what you can sort out.

KB: OK. Regarding the dress thing, one consistent thing that I noticed is that you seem to really

DC: Yeah, definitely! (said with much enthusiasm) Myself and Paul are big fans of Dr. Who, the old British sci-fi TV show, and there was one actor who played Dr. Who in the seventies called John Pertwig. [I may not have the last name correct. Are there are any Dr. Who fans reading this? -Ed.] And his trademark was that he always wore frilly shirts and that's something that I was really into. It's kind of something I've always copied, really. I've always loved buying old seventies frilly shirts, and when we got the band together I didn't see any reason to change.

KB: It's a chance to wear them all.

DC: Yeah, exactly. Now I never have to change out. So that's where that comes from. And also I suppose it also comes from Brian Jones as well. He was one of my heroes. I quite liked his eccentricity and the way he dressed. But it's very much a Dr. Who thing. There was one particular Dr. Who shirt, which was the best one. It was a frilly shirt but it was a zip up. I've never seen a frilly shirt with a zip, I haven't been able to find one, but I really want one. See what you can sort out.

KB: OK. I'll get that in print and see if I can come up with a few.

KB: Ok. There was a period you went through where you were testing the limits of rock 'n' roll excess. What was your feeling about that?

DC: That was an extension of kind of the fact that before we were a band were four lads who had a laugh together. Basically we didn't have any other friends so we just hung out together. You know, and we like a party as much as the next four people, but itís something we keep to ourselves, itís not something we go down to London to do in front of a lot of people. But obviously, when you get on the road...now people are around and they see and they come in on it. But it didn't last very long because we realized straight away that we couldn't do that and get on stage and deliver a decent show. Or get in the studio when we weren't touring and make good records, and that was what we wanted to do more than anything; to play good shows and record good records. So pretty much as soon as we got signed, we stopped messing around. I guess a few people saw a few good parties when we started out. Maybe we're just more fun to be with than other people, I don't know.

So pretty much as soon as we got signed, we stopped messing around. I guess a few people saw a few good parties when we started out. Maybe we're just more fun to be with than other people, I don't know.

KB: Also because success came pretty quickly since you formed the band and you started going around to record companies. Well, you started out with your own label, but soon after that, you were picked up by a major label so you didnít have that long stretch of time to ponder what this is all about. It's just a lot to handle in a short period of time.

DC: Right, well we were quite excited about the whole thing, obviously. We had no preconceived ideas of what any of it involved because it was something that was almost sprung upon us. We became serious about being a band, when we realized that there were people who wanted to sign us and people who wanted to see us play and things like that. But that wasn't why we formed the band--we formed the band because we had nothing else to do. So when we started out, it was quite exciting, really! We weren't thinking," this is what we thought it would be like, and we're we right?" We weren't wasting time finding out if the business was everything we thought it would be, cause we didn't know. So it was just quite exciting to suddenly be presented with the opportunity of going out to play some gigs and make records for a living. Once we started doing that, we realized how much we loved doing it. When we signed the record deal, we thought, "Right. Time to knuckle down and really take this seriously. " That's when we really started to put our heads into the band.


KB: What was it like growing up in Chester?

DC: Well I didnít really grow up in Chester, I lived there for like six years, I grew up in the South of England, in a place called Maidstone, it's about 30 miles southeast of London in the county of Kent. I left there about when I was seventeen and moved up northwest to Chester. I started going to college in North Wales, cause Chester is just on the border of England and Wales. I studied languages, but kind of got fed up with that pretty quickly because I realized that I wasn't really cut out for full time studying. My attention span didn't suit it. (laughs) The first thing I did was to just get a job as a barman, and I got dangerously close to making a career of it as well. I stayed working there for quite a while. That's how I got to know Paul and Stove cause they used to come drink in the bar where I worked, and we became mates.